Christmas is fast approaching and we are pleased to be able to let you know the details of the Christmas Lunch planned for this year. The menu is a traditional Christmas turkey dinner with a Vegetarian option. Unless your child is eligible for free school meals, the cost of the lunch will be £2.30 and this needs to be paid on the day.  Please return the reply slip below even if your child is entitled to a free school meal or does not want a Christmas dinner.

There will be a change of menu on Wednesday 9th from roast dinner to a pizza day and this will allow for the traditional Christmas roast on Friday 11th. December.

Friday 11th December will also be a bright coloured clothes day for the children and School uniform will not need to be worn.

Please see the letter below. 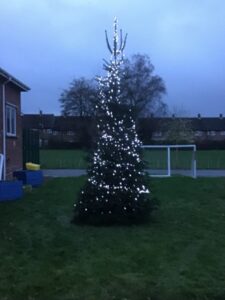 We would like to say a huge thank you to the Friends Of Crowmoor for supplying and organising the delivery of our beautiful Christmas tree.

School decided to locate it outside this year so that the wider Crowmoor community would benefit from it and it’s sparkly lights.

Thank you once again!

This terms Safer School meeting took place on Tuesday afternoon. It was attended by Mr Parkhurst, Mr Bartlett from Shropshire Council, the new Head Girl, Head Boy and the Deputies and the Safer School representatives from Year 6.

We had a good response from the parent questionnaires that had been sent out prior to the meeting. Parents commented on how happy they were with the School’s Covid arrangements at drop off and pick up and they felt that the School was as safe for the children as it possibly could be. The children who attended the meeting all agreed that they felt happy and safe in School – these thoughts were mirrored in the questionnaires that the children had completed in School.

The questionnaires did raise the issue of litter on the streets and pathways around the School and we have contacted the Council regarding this – we will continue to pursue this until we are satisfied with the outcome.

“Just attended a virtual ‘Safer School’ meeting at Crowmoor Primary School and it was amazing. We have these meetings three times a year and although there has been the challenge of Covid this year, the feedback from parents/carers and the involvement of pupils, was particularly good. Such a positive meeting on security and safety and still, Mr Parkhurst has plans to make further improvements. The only issues (and mainly litter) were outside the school boundary and although beyond the direct control of the school, there are plans to raise the profile and reduce this issue. I was especially impressed by the enthusiasm of staff and pupils and looking forward to the next meeting in 2021.”

There will be another meeting next term.

You have the right to find out things and share what you think with others, by talking, drawing, writing or in any other way unless it harms or offends other people.

Letters have been sent home to those who are eligible for the above today. If you receive a letter, please ensure the reply slip below is returned by Friday 4th December.

If you do not return the reply slip by this date, you will not receive a voucher.

If you have any queries regarding this, please contact the office.

received from the Woodland Trust. 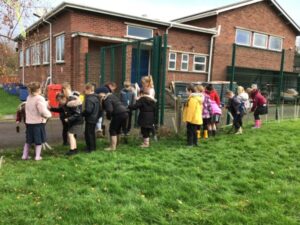 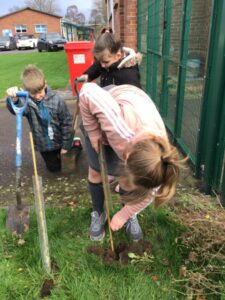 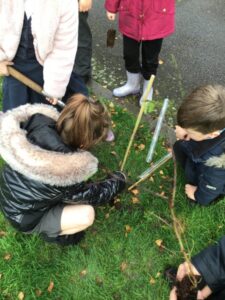 Today we are wishing Mrs Brunyard a very happy maternity leave then next Friday Mrs Fairclough will be starting her maternity leave! Both are expecting a baby early next year. 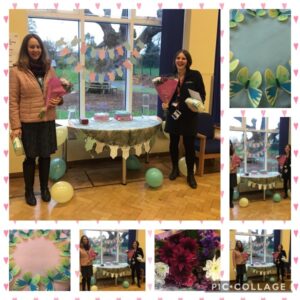 We hope they will both keep us updated! It’s such an exciting time and great to have good news to share.

Congratulations to Willow Class who are this weeks winners of the cup and Jelly Babies with an attendance of 99% – well done!!!

You have the right to special care and help if you cannot live with your parents.

You have the right to care and protection if you are adopted or in foster care.